The Butcher's Knife Severed His Own Tongue 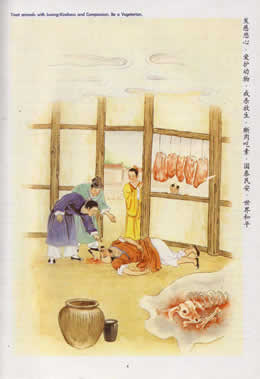 Long ago, in Huang-cao-tang of Chang-shu County, Jiangsu, there lived a butcher named Xu. His job was to slaughter the cows. Before slaughtering a cow, he would slice off its tongue first. The poor animal would scream in great pain while undergoing such extreme torture. However, Xu was not at all bothered. After slaughtering the cow, he would bring the tongue home, cook and eat it with wine. He felt that it was especially delicious eating it this way.

One day as Xu was placing his butcher knife on top of the door frame, he heard a noise caused by two rats fighting up on the door frame. Out of curiosity, he looked up with his mouth agape. Unexpectedly, the knife was then pushed down by the rats and landed right into Xu's mouth. The knife severed his tongue and he died instantly.

Xu who was extremely brutal and enjoyed eating cows' tongues and drinking wine was eventually killed by his own knife. The morale of the story was that the corresponding rewards or retributions in the working of cause and effect is indeed true and are not simply fabricated by anyone.