Disasters Can Be Avoided By Being Compassionate 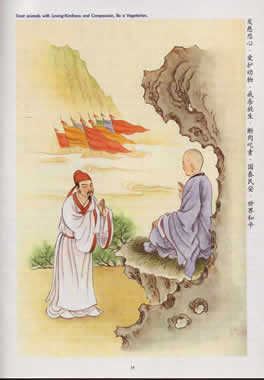 During the MIng Dynasty, there was an Upasaka named Wang who was a very pious Buddhist. He would recite the Sutras and make obeisance to the Buddha everyday. During that time, there were natural disasters and calamities everywhere and Wang was very concerned about this. When he heard that in Xiao Dongtian, there lived a Sangha who could look into the pasts and futures, he decided to pay him a respect as well as to seek his advice.

After making obeisance to the Sangha, Wang said: "There are bandits everywhere. People wage wars all the time. May the Honored One be kind and compassionate and help the living beings." The Sangha smiled and explained: "If people could liberate lives and refrain from killing, they would be free from disasters and calamities." After saying that, he shut his eyes and sat in meditation.

Note: Today's world is a world of wars, famines, epidemics, natural disasters and man-made calamities which occur one after another. The reason behind these happenings is the karmic effect of killing. They are not brought upon us by ghosts or spirits. These incidents warn worldly people to refrain from killing. If a man could refrain from killing, he would be free from disasters and calamities. If a family could refrain from killing, it would be free from disasters and calamities. If the practice of non-killing could be extended to a village, a county, a province and the whole country, the people therein would be free from disasters. Worldly people blame the heavens when disasters and calamities strike. They fail to recognize that these actually originate from our own actions. We are the ones who caused the natural disasters and man-made calamities to befall on us. If a man can make a vow to liberate lives and to abstain from killing, then even if he were to be surrounded by dangers, or go into battle, or encounter famine and pestilence, he would still be unharmed. If every man could truly believe in this and practice diligently, good effects will follow just like the form is following its shadow. From the past till present, the rewards and retributions of good and evil deeds can be seen clearly. In fact, there were many records written on the efficacy of cause and effect. So why are people still hesitant about starting the good practice of non-killing?